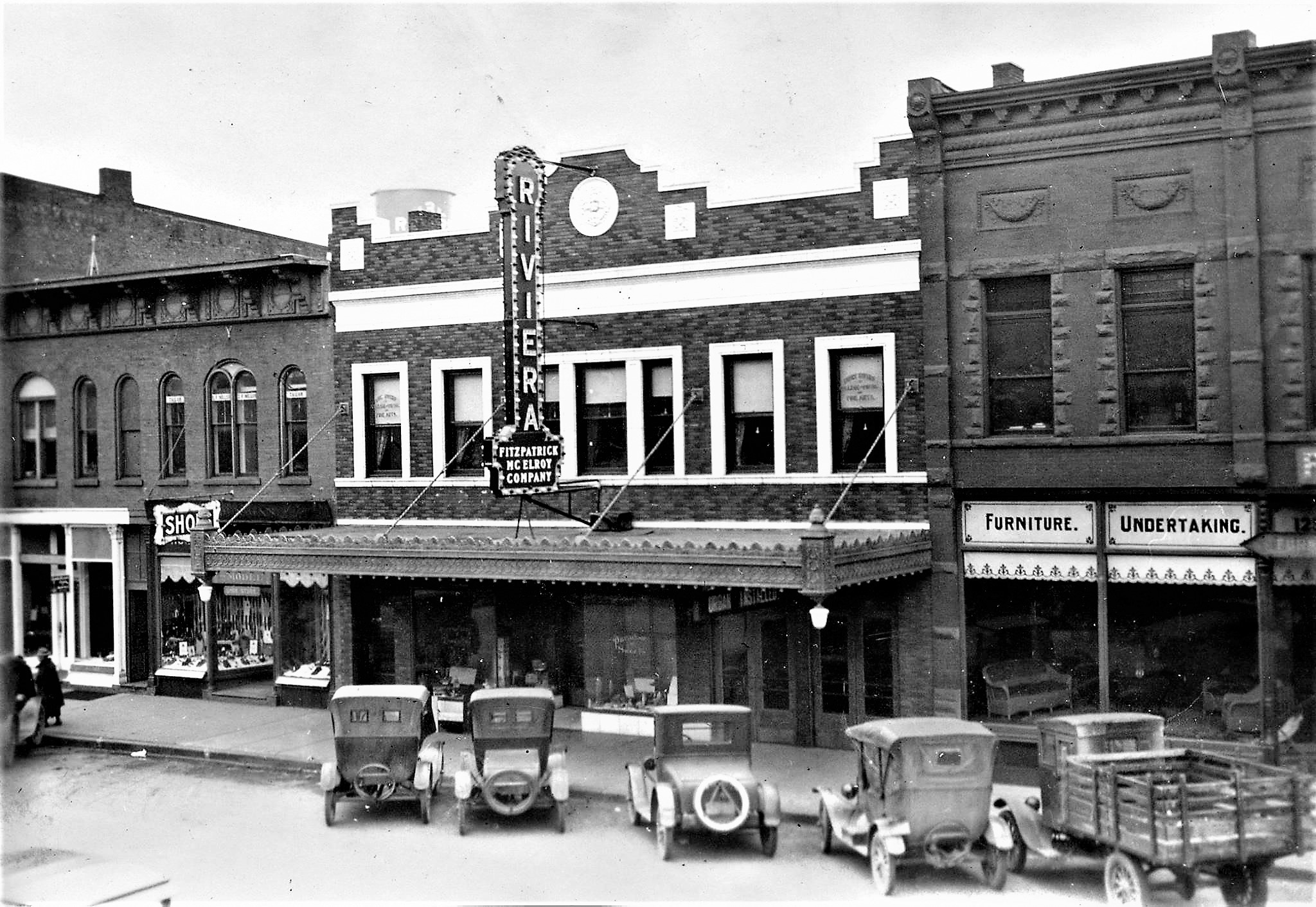 The Riviera Theatre first opened its doors to the public on December 23, 1925. It was neither the first nor the only movie house in Three Rivers – historical records indicate that there were several movie theatres operating in the early 20th century in Three Rivers as patrons flocked to see the new ‘moving pictures’ and the ever-popular vaudeville acts. The movie shown at the Riviera on opening night was “The Lucky Devil”, starring Richard Dix. There was also a performance by McDonald’s Music Mixers, a group that played a large variety of instrumental selections and comedies. Advertised as “Southern Michigan’s Most Beautiful Amusement Palace,” the Riviera was, without doubt, the grandest and most ornate facility in the area, rivaling similar venues in the much-larger cities of Chicago and Detroit in style if not in size.

In April 1925, the Lintz building (women’s clothing store) was razed on the site to make room for the new theatre under the ownership and direction of the Fitzpatrick-McElroy Company of Chicago. Already having a presence in Three Rivers via ownership of the Rex (later Rialto) Theatre across the street from the site for the Riviera, the Fitzpatrick-McElroy Company successfully owned and operated many theatres throughout Michigan, Wisconsin, Illinois and Indiana. Local businessman Luther Warner, then manager of the Rex Theatre, was instrumental in helping design the new theatre along with local architect J.C. Brompton. Mr. Warner was hired to manage the Riviera; he continued to manage both the Rex Theatre and the Riviera Theatre until his death in 1946.

The Riviera Theatre was constructed and furnished in just eight months. Every detail seen and experienced by the public was meant to invoke a sense of comfort, grandeur, and prosperity: from the plush carpeting throughout the lobby and aisles, to the modern heating and cooling system that conditioned the space year-round, and the gilded ornamental plaster utilized throughout; the result was spectacular. A great Kimball pipe organ created the mood during silent movies and provided lively entertainment during intermissions and special concerts. In addition to housing the theatre, the building was also home to other businesses. The area above the theatre was initially occupied by the Three Rivers College of Music and Fine Arts, which was affiliated with the University Extension Conservatory of Chicago, and offered certification in musical education and “thorough instruction in all departments of art”, according to an advertisement. It is not clear how long the school occupied the space. Throughout the years, other businesses such as various professional offices, a beauty parlor, and the local radio station WLKM would call this location home.

In 1927, Butterfield Theatres leased the Riviera Theatre and continued its successful operation for many years. Since opening in 1925, there have been two major building projects: in the mid-1940s, a major remodeling took place to include new seating and decoration inside the theatre, as well as the replacement of the original marquee with a new ‘Hollywood’-style marquee above the main entrance; in 2006, restoration began to bring back the original 1925 ambiance as much as possible. A new bar/concession area was added in the storefront next to the entrance, which once was home to such businesses as the Riviera Soda Grill and King’s Café. Minor projects over the years include the installation of a large, non-movable ‘Panoramic’ movie screen in 1954 (which made the stage no longer usable and eliminated the Kimball pipe organ, which was given to a local church), and various upgrades and additions to the projection equipment and sound system.

The Riviera Theatre has served patrons almost continuously since 1925, closing for only a few years between then and now. The new owners and management look forward to bringing to the area excellent and varied entertainment options: movies, live music, stage productions, magicians, and comedians, as well as other possibilities. The theatre is also available for rentals, and so far has enjoyed hosting weddings, class reunions, presentations, birthday parties, and many other events. Welcome back to the Riviera Theatre!

Welcome back to the Riviera Theatre!